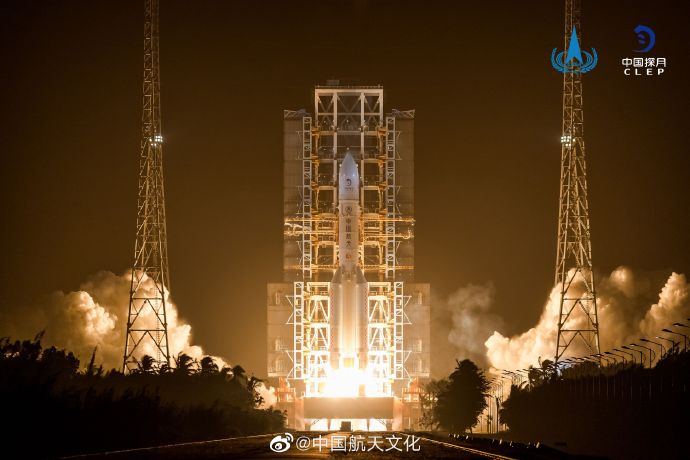 On 24th November 2020 on a very mid early morning Tuesday  of 0530 Hong Kong- Beijing Time in which successfully launched the CNSA –CLEP China National Space Administration- China Lunar Exploration – Belt and Road initiative Lunar Mission ….. Launching from Wenchang Spacecraft launch center – Hainan Province – China- People’s Republic of China… the previous day the Staff of Wenchang about 18:30 on November 23, 2020, the Long March 5 Yao carrier rocket began to refill liquid oxygen and liquid hydrogen cryogenic propellant, and it is planned to be implemented at 4 am to 5 am on the 24th. Launch mission. This is the second applied launch of the Long March 5 series of carrier rockets, which will transport the lunar exploration project Chang’e 5 probe to the Earth-Moon transfer orbit, and implement my country’s first extraterrestrial celestial body sampling and return mission. The launch window time of the Long March 5 Yaowu rocket is based on comprehensive consideration of the earth-moon position relationship and other factors, and the best launch time is selected after orbital design…..

During the early morning crowds from all over China travelled and gathered all around the view placements locations with the best views of the launching of the Change 5 with the Long March –Chang Zheng 5 Carrier Rocket…. in which it was live broadcast stream on various social media planforms but one detail on weibo live from CCTV news..

During prior  of 17th November 2020  Today it was the roll out At eight o’clock today, the Long March 5 Yao carrier rocket completed the related work in the technical zone at the Wenchang Space Launch Site in China and was vertically transferred to the 101 launch station. It is planned to launch the Chang’e 5 in the early morning of November 24th 2020 of in which it has been a very busy week for the crew at the Wenchang Spacecraft launch center –Hainan Province – China- People’s Republic of China.. in which it’s finally assembled the Long March 8-Chang Zheng 8 Carrier Rocket in which it’s a testing case for a  55 meter tall long Reusable Carrier Rocket.. in which is currently fully staging on the its’ launch platform in the moment of testing..  Current at the moment it’s the Long March 5-Y5  in the process been assembled for the CNSA – China National Space Administration CLEP – China Lunar Exploration Program Belt and Road Initiative… On the return collection sample on the Mons Rumker section of Earth’s Moon Luna-Chang’e…

In which during at the same time. And the Chang’e-5 probe completed the assembly and testing of the technical zone at the Wenchang Space Launch Site in China, and were transferred vertically to the launch area. They are scheduled to launch in late November. Later, after completing the rocket function inspection and joint testing and confirming the final state, the rocket will be filled with propellant and launch according to the procedure.

In previously The Long March 5 Yaowu carrier rocket was safely transported by the Yuanwang transport fleet to Qinglan Port, Wenchang, and Hainan in late September, and was transported to Wenchang Space Launch Site in China in stages by road transportation. Since then, the rocket has successively completed various preparations such as final assembly and testing in accordance with the test launch process. The Parts of the CNSA Long March 5 Chang Zheng 5 Yao 5 Carrier Rocket was transported towards the Tianjin Port in which it was hoisted on the CNSA’s Carrier Rocket transport ship the Yuanawang …. In which it’ll makes it way traveling towards Wenchang Spacecraft Launch Center in Hainan Province – China-PROC.. In following which will be assembled to ready to launch the Belt and Road Initiative Lunar Change5 return sample planned landing zone is Mons Rumker in Oceanus Procellarum, located in the northwest region of the near side of the Moon…… The location is a large, elevated volcanic mound 70 km in diameter that features a strong spectroscopic signature of basaltic lunar mare material.

The mission is reported to consist of four modules or elements: the lander would collect about 2 kg of samples from 2 meters below the surface and place them in an attached ascent vehicle that will be launched into lunar orbit. The ascent vehicle will make an automatic rendezvous and docking with an orbiter that would transfer the samples into a sample-return capsule for their delivery to Earth…. Change5 lunar lander equipment payload composite off…. The lander will carry landing cameras, a panoramic camera, a spectrometer to determine mineral composition, a soil gas analytical instrument, a soil composition analytical instrument, a sampling sectional thermo-detector, and a ground-penetrating radar…….. For acquiring samples, it will be equipped with a robotic arm, a rotary-percussive drill, a scoop for sampling, and separation tubes to isolate individual samples……

The scientific goals of the Chang’e-5 mission are mainly to carry out the landform area detection and geological background survey, obtain the on-site analysis data related to the lunar samples, establish the connection between the on-site exploration data and the laboratory analysis data; carry out the system of the lunar samples , Long-term laboratory research to analyze the structure, physical properties, and material composition of the lunar soil, and deepen the research on the origin and evolution of the moon.
China’s lunar exploration project is a national key science and technology special landmark project clearly defined in the “National Medium and Long-term Science and Technology Development Plan (2006-2020)”. It is a major project to promote the development of aerospace industry, promote scientific and technological progress and innovation, and improve comprehensive national strength. Strategic decision. Since the project was established and officially launched in January 2004, five missions including Chang’e 1, Chang’e 2, Chang’e 3, re-entry flight test and Chang’e 4 have been successfully implemented. This launch mission is the 353rd flight of the Long March series of carrier rockets.