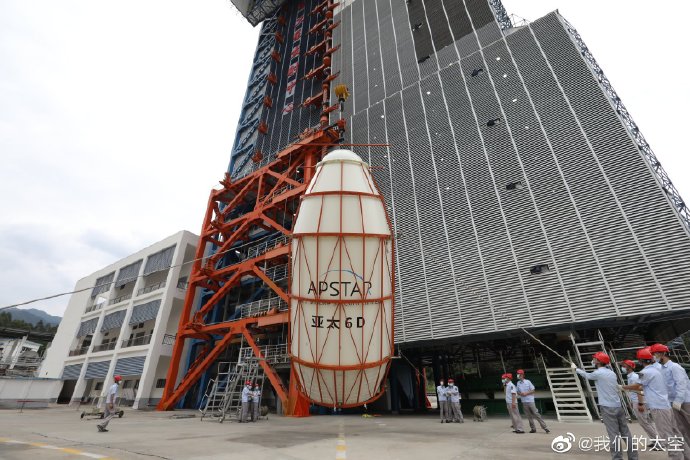 During This month of July 2020 in which it’ll launch At 20:11 today on the 10th July Friday Beijing time  ,  successfully used the Long March 3B carrier rocket at the Xichang Satellite Launch Center to successfully send the Asia-Pacific 6D satellite into a predetermined orbit, and the launch was a complete success…..in which Xichang Satellite Launch Center in Sichuan Province China –People’s Republic of China in that Xichang Preparations of one of Many CNSA –China National Space Administration Launch Center..  in preparations for the July 2020 launch calendar..

During the preparations The Asia-Pacific 6D satellites has been transferred from the technical zone to the tower of the launching zone…. In which set to launch in early July on a 54.8 Meters Long March 3B –Chang Zheng 3B Carrier Rocket in which during this week it’s been assembled together readily …. The Long March 3B/E, also known as 3B/G2, is an enhanced variant of the Long March 3B, featuring an enlarged first stage and boosters, increasing its GTO payload capacity to 5,500 kilograms in which also he Long March 3B and 3C can optionally accommodate a YZ-1 upper stage, which has been used to carry dual launches …. Manufactured by CALT – China Academy of Launch Vehicle Technology.. 中國運載火箭技術研究院…. CALT is a subordinate of the larger China Aerospace Science and Technology Corporation (CASC). It was established in 1957 and is headquartered in Fengtai District, Beijing….. The Long March 3B carrier rocket that carried out this launch mission has previously completed the transshipment and has completed the preliminary test work

Images and Visuals are from Weibo