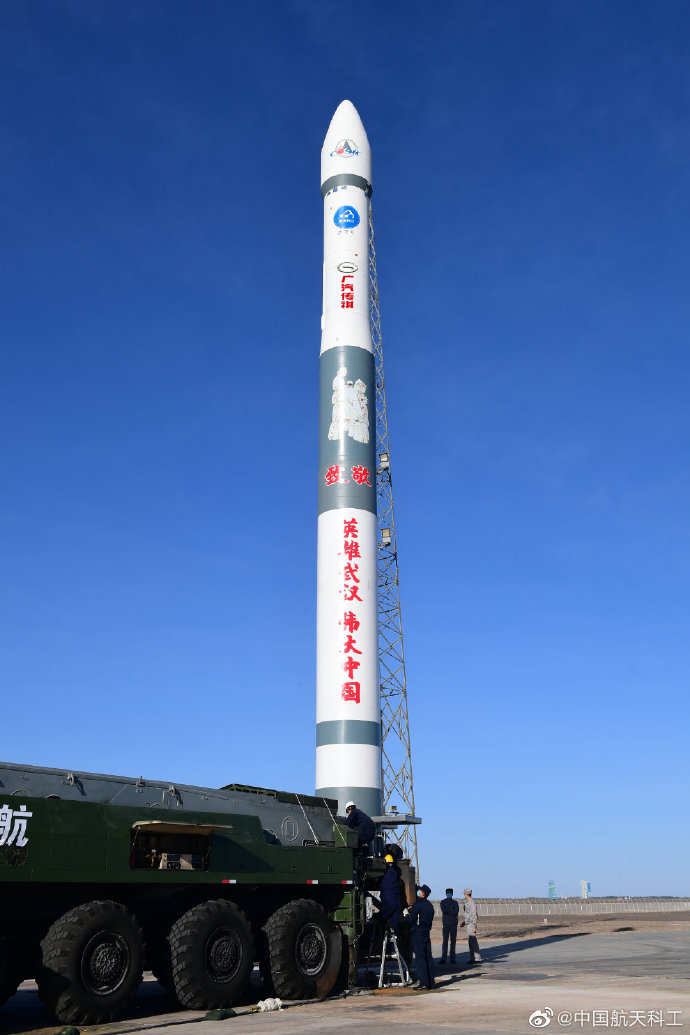 One 9:16 on one Beijing Morning  on May 12, 2020, China used the Kuaizhou No. 1 A carrier rocket at the Jiuquan Satellite Launch Center to successfully move the cloud with “one arrow and two stars”. The No. 2 01/02 star was launched, and the satellite entered a predetermined orbit. The launch was a complete success…. Launching from Kuaizhou No. 1 A carrier rocket one of many Carrier Rocket variant series of the Wuhan based  Expace, 中國製造 Expace Technology Corporation- a CASIC -China aerospace science and industry corporation… in which is launched from a mobile tractor launch platform truck, in which that platform is launched from one of many CNSA –China National Space Administration..  in which launching from Jiuquan Satellite launch center in which is located in the Gobi Desert, inner Mongolia- People’s Republic of China…..

Successfully launch the Xingyun 2 01/02 star into the sky in a “one arrow, two stars” way. Entering the scheduled orbit, . This launch of the Xingyun II 01/02 star was developed by Aerospace Xingyun Technology Co., Ltd. This is the ninth launch mission of Kuaizhou-1 A carrier rocket….Developed by the Xingyun Satellite Co., the satellites will conduct tests on technologies including space-based IoT communications, inter-satellite laser communications and a low-cost commercial satellite platform……They will also carry out initial pilot IoT applications…. KZ-1A is a low-cost solid-fuel carrier rocket featuring high orbit precision and a short preparation period. The rocket, developed by a company affiliated with Sanjiang Group under the China Aerospace Science and Industry Corporation (CASIC), is mainly used to launch low-orbit small satellites.

Today’s launch is dedicated to the women and men of the Health care services in which in collaboration with the untold whom of been on the front lines of combating the Pandemic of Covid 19 in which Expace, 中國製造 Expace Technology Corporation ExPace also called CASIC Rocket Technology Company, is a Chinese space rocket company based in Wuhan, Hubei, China. Its corporate compound is located at the Wuhan National Space Industry Base space industrial park……as it company is located in Wuhan in which was the Epicenter now lock down has been slowly recovery reopening of the city of eleven million progressively going back to normal..