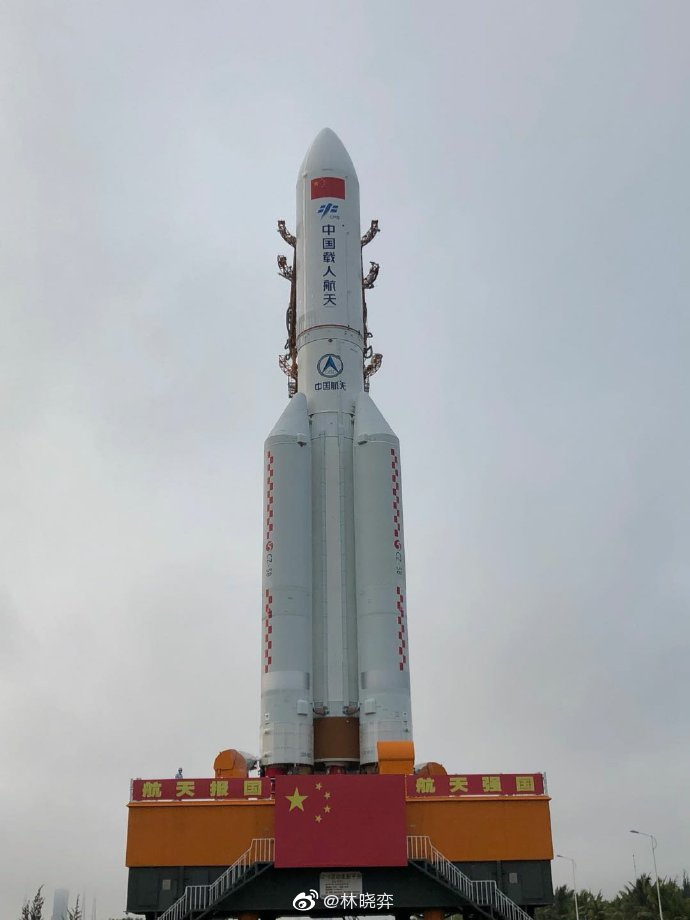 During this month of March 2020 in which at Hainan Province- at Wenchang Space launch center in the China-People’s Republic of China.. In which there’s been progressive developments of construction of the Long March five – Chang Zheng five Carrier Rocket……During the CNSA – China National Space Administration launch 2020 calendar, the CNSA in with the Belt and Road initiative  Alliances with the ESA- European Space Agency also with United Nations Outer Space Affairs, ROSCOMOS in developing the next Country’s Space Station in which are currently finalizing there modules component construction in which contain in that construction experimental modules in which it’ll be carried onwardly with the Long March 5B,  in which it’ll be the first time the CNSA they will launch the Long March 5B into space..  Into a Launching Low Earth Orbit in a in between Attitude of 350 to 450 Kilometers above Earth’s orbital inclination of forty two too forty three Degrees…

Among with the Space Alliance with CNSA taking the lead, is ESA, Russian ROSCOMOS also the United Nations Outer Space Affairs Office among with the Belt and Road initiative countries in developing preparing together for deep space missions and manned mission to towards the moon and Mars….

Launching from Launch Complex one, Wenchang Satellite Launch Center, Hainan in the first  second quarter calendar is the first foundation core module of the Tianhe- Harmony of Heavens, Tainhe will provided the environmental life support, living quarters with three crew members also it’ll provide the main bridge of the Space Station with Navigational Guidance’s controls in which that compartment is one of three compartments of the station the second the non-habitable service section, then the docking section hub unit.. the primary Environmental living section consisting of living quarters, kitchen, toilet, fire control equipment Atmospheric processing providing control equipment, computers with scientific, multiple purpose communications installations.. Also with a small Remote Manipulate Robotic MIR Lyappa Arm to assist in adjoining the other five further modules that have yet to arrive in completing the first stage of the station…… the Docking mechanism is compatible with the Russian also ESA’s aswell due that that the International Space Station is based on the ROSCOMOS’s Mir Space Station Design in which formalised docking mechanism standards..  As the Tianhe is constructed it’s too first to house three selected Taikonauts, Cosmonauts, and European Space Agency Astronauts as the station grows with more module it can accommodate more to its design criteria limit..

The long March five –Chang Zheng five is the largest currently, in which soon there are other larger variants of the Long March Ultra Heavies in the process with more heavy more challenging payloads to cater towards more expansive missions also constructions of more expansive larger CSS China Space Station in which in collaboration with its Belt and Road Partnerships countries and organisations.. ..

Manufactured by CASC- China Aerospace and Technology Corporation – CALVT China Academy of Launch Vehicle Technology, at Tianjin City … in which is the sister organisation towards CNSA…China Academy of Space Technology  …. Given lesson learnt from the second, third modified the Long March five Y3 in which is powered up Main propulsion system is an engine on Hydrogen and Oxygen YF-77 Engines in which is core.. As for the secondary it’s the YF-77D in which the external Boosters are of YF-100 Engines Kerosene fed… Chang Zheng 5- The Long March 5 is the heaviest rocket in China’s fleet, and one of the most powerful launcher’s in the world. The Long March 5 can deliver up to 14 metric tons — nearly 31,000 pounds — to geostationary transfer orbit, a popular target orbit for large communications satellites. The launcher’s lift capability to low Earth orbit is around 55,000 pounds, or 25 metric tons…  once deployed Shijian 20 – spacecraft will use its own propulsion system to circularize its orbit at geostationary altitude more than 22,000 miles -nearly 36,000 Kilometers over the equator…..

Images and visuals are from Weibo…