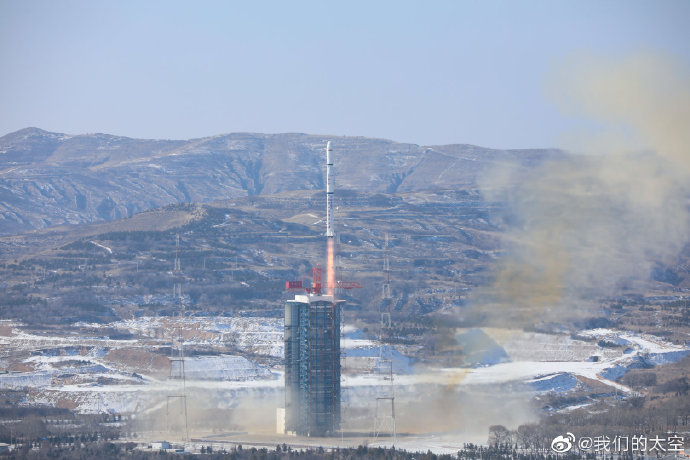 On 20th December 2019, Morning 1122 hours local time on a wintery clear Taiyuan Satellite Launch center, Shanxi province – People’s Republic of China CNSA China National Space Administration… Launched an international iconic Long March 4B – ChangZheng 4B carrier Rocket… In which the event of the launch was to celebrated the twenty years anniversary of the Macau handover back to Motherland- China –People’s Republic of China.. In which was celebrated on that day…..

In which the delivering the payloads satellites into its planned orbit in which the first payload is a collaboration in between the people’s republic of China and Brazil, in collaboration development in which that development was previously collaborative development of series of Earth Sciences – resources satellites in which is the CBERS in which the newly  inserted  CBERS 04A replaced its preceded CBERS 04… as its next generation helps data analysis provisionments for land resources, monitoring the environment and climate change and help analysis disasters prevention. It will also provide servicements to countries in Asia, Africa and Latin America regions.

Within the new satellite installed with multispectral cameras which can provide optical remote sensing data in high, medium and low resolutions. It has more stable imaging capability than its predecessors, with higher extremely degree of positioning accuracies… in which the collaboration together provides social culture exchanges- economic in working together that collaboration with China Academy of Space Technology and the National Institute for Space Research of Brazil. The carrier rocket was developed by the Shanghai Academy of Spaceflight Technology….

The secondary payload satellite is the first introductory satellite for The same rocket put into orbits another eight satellites, including a wide-range multispectral remote-sensing microsatellite donated to Ethiopia in which now giving Ethiopia as developing country a chance in having a space program of their own in inspiring their citizens in education working in space Sciences….  One of the eight of payload satellites is aimed at researching Gravitational Waves in which Tianqin No.1, a gravitational wave detector measures extremely slight changes and differences of gravitational waves..  in the millihertz frequencies. The experiment relies on a constellation of three drag-free spacecraft orbiting the Earth. Inter-spacecraft laser interferometry is used to monitor the distances between the test masses. The experiment is designed to be capable of detecting a signal with high confidence from a single source of gravitational waves within a few months of observing time. We describe the preliminary mission concept for TianQin, including the candidate source and experimental designs. We present estimates for the major constituents of the experiment’s error budget and discuss the project’s overall feasibility. Given the current level of technological readiness, we expect TianQin to be flown in the second half of the next decade…..

Images and visuals are from weibo..