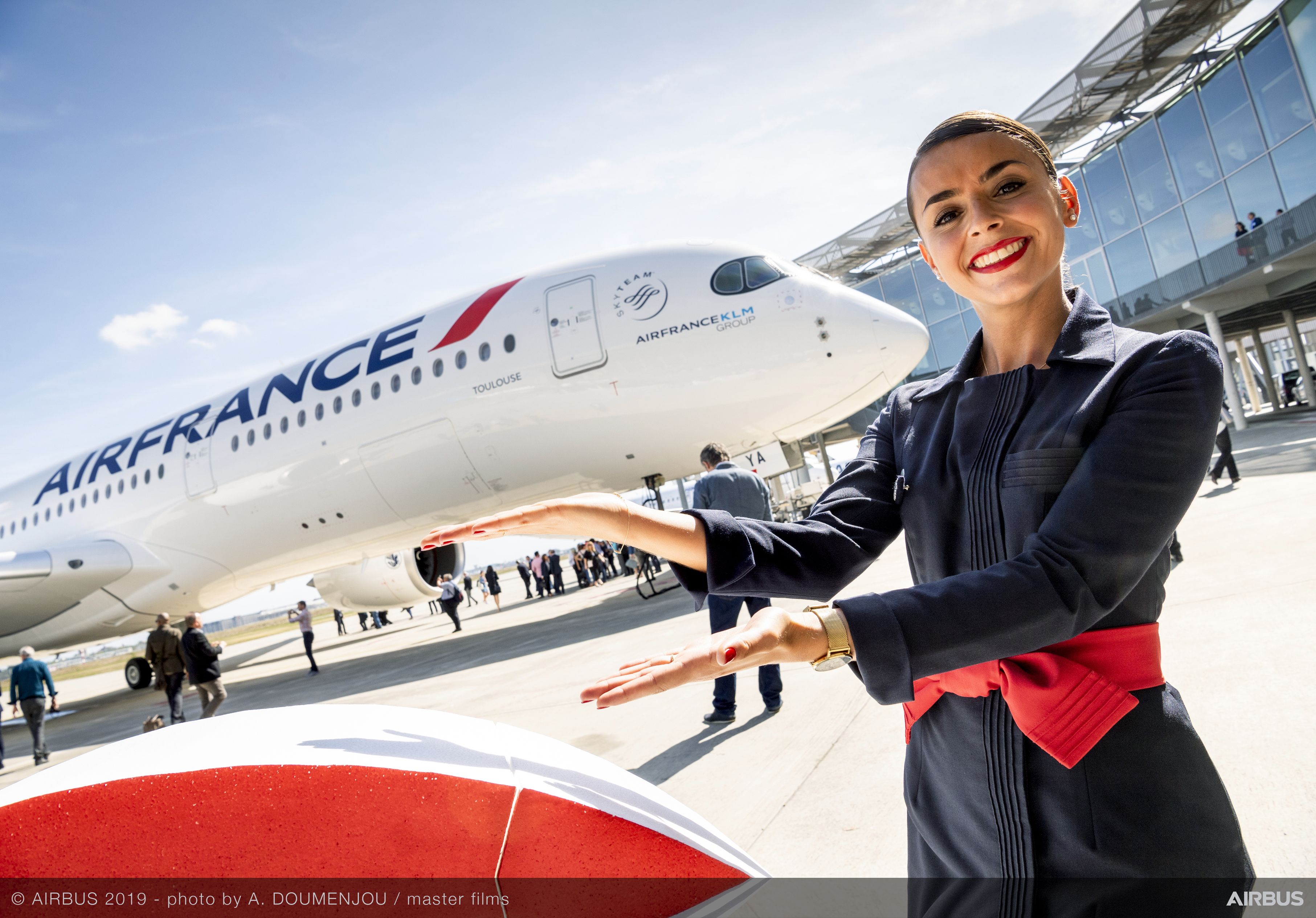 On the month of October 2019, Air France has taken its first delivery of its first Airbus A350-900 in which it’s the first sister of its twenty eight fleet of the new wide body aircraft.   In which it has taken its first delivery Ceremony at Airbus Toulouse France…  in which was hand over to the Anne Rigail, Air France Chief Executive Officer and Benjamin Smith, Air France-KLM Group Chief Executive Officer, by Airbus Chief Commercial Officer Christian Scherer…..

Air France taking on with its twenty eight fleet of A350-900 in which featuring its Airbus 350 series  XWB-Xtra Wide Body design featuring in three tier class layout… In which that layout is in its design route of the transatlantic also Asian flight routes… Having with a three hundred and twenty four seats, thirty four are in full –flat business, twenty four in premium economy also in which two hundred economy class seats..

Taking from the fuel economy experience from Cathay Pacific Airways of integrating bio fuels of focusing of the environmental in which providing a twenty five percent carbon dioxide emissions of fuel burn.. taking from interior wise Featuring with Airbus Innovative Airspace by Airbus Cabins in featuring extra layering of comfort in which new Airbus Airspace cabin experiences introducing into with new features with advance inflight WiFi, with new innovated seating economy arrangements with comforting seats that if you’re like seating in business class… with a scientifically designed cushioning head rest that rest your head while sleeping so you won’t need to bring a neck rest… as part of that comfort is WiFi systems in which connects you towards  the rest of the internet connectivity in which from keeping up with you socials towards  allowing you to work while you’re travelling on flight long haul..  Featuring with the advance Airspace Cabin environmental systems it features with the advance Air conditioning systems giving you that right temperature management among with mood lighting ensuring giving passengers that sense of minimizing jet lag as they fly inwardly towards their destination..

Apart from its Traditional design layout of the Airbus 350XWB-900 Series Several major modifications of the airliner in which building up towards the A350-900ULR with relocating the sensors in the fuelling systems in which existing tanks to carry the maximum fuel capacity and load for the ULR variant.. Also fine tuning with its Rolls Royce Trent XWB Engines for that extensive range… with maximum fuel efficiency in mind…