On a very spring day of 27th March 2019 LinkSpace in which is among sixty more Private Space Companies in China …. Link Space Aerospace Technology, a Beijing based Private Space Commercial Company among sixty more in China.. have successfully tested there small version of what’s to come with an larger reusable carrier rocket that’s set out to become like of Space X Falcon Nine Reusable, also its heavier variants, among in the reusable Carrier Rocket Development is the next generation of CNSA- China National Space Administration Heavier Long March  reusable Carrier in the eight, nine series..

LinkSpace did a very successful test on rocket recycling on March 27, 2019. It will support us to open the next PLAN. Thank you Dr. @robert_zubrin for being here to witness this exciting milestone. Later, NewLine Baby(RLV-T5) will undergo higher flight tests in the future. pic.twitter.com/9aIpLopstW

On July 2016 the company have achieved the required means of Rocket retro Technologies, on using a single vector control engine…  in which leading to controlling engine thrust on recovering the Carrier Rocket stage to reused again to lower the cost involved in sending a payload into orbital means on the same launched design heritage among Space X , Blue Origins…..located in heart of Beijing Economic Technological Development Area… also they located in the Beijing, Guangdong, Shandong, Shaanxi ..

During the early this year they successful tested a short range smaller scale of the initial size of their carrier rocket from VT-VL- Vertical Take-off towards Vertical- Landing…  at their testing facilities in which they being Home Made designing since founded on 2014 January  from many whom worked within the Aerospace and space industry in China..

They recent been featured in the Hangzhou Technological innovation conference in a three day event show casing their startup n Reusable carrier Rockets in which the design lineages is Akin but Home grown too the same aspects of SpaceX Reusable Carrier Rockets..  There evolution is towards to multiple staging reusable Carrier Rockets…  as to that as part to that the company plans to manufacture micro and cube satellites communications or variant purpose designs satellites in Subsidiaries Company as all the components of the Space Link Aerospace is built in house..   As there carrier Rocket becomes commercially it can transport at 200 Kg payload satellite into five Hundred Kilometers attitude …..The primary propulsion system of their RLV-T3 Carrier Rocket is primary a liquid-solid engine combination design

On that day Link Space Aerospace Technology have successfully test launched untethered their new experimental reusable Carrier Rocket on its testing firing its launch on its newly acquired launch pad marked “Welcome to Earth” on that day it launched to an experimental height in which test its capabilities un tendered to which It launched successfully then it was on a holding height for a few minutes more till it was time to land on the same location where it launched from.. in which landed comfortably…  it was observed by Doctor Robert Zubrin  whom witness the milestone perfect landing in which will leading to a newer design New line Baby the RLV-T5 series in which will launched further with higher achiever 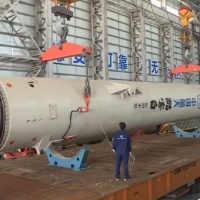