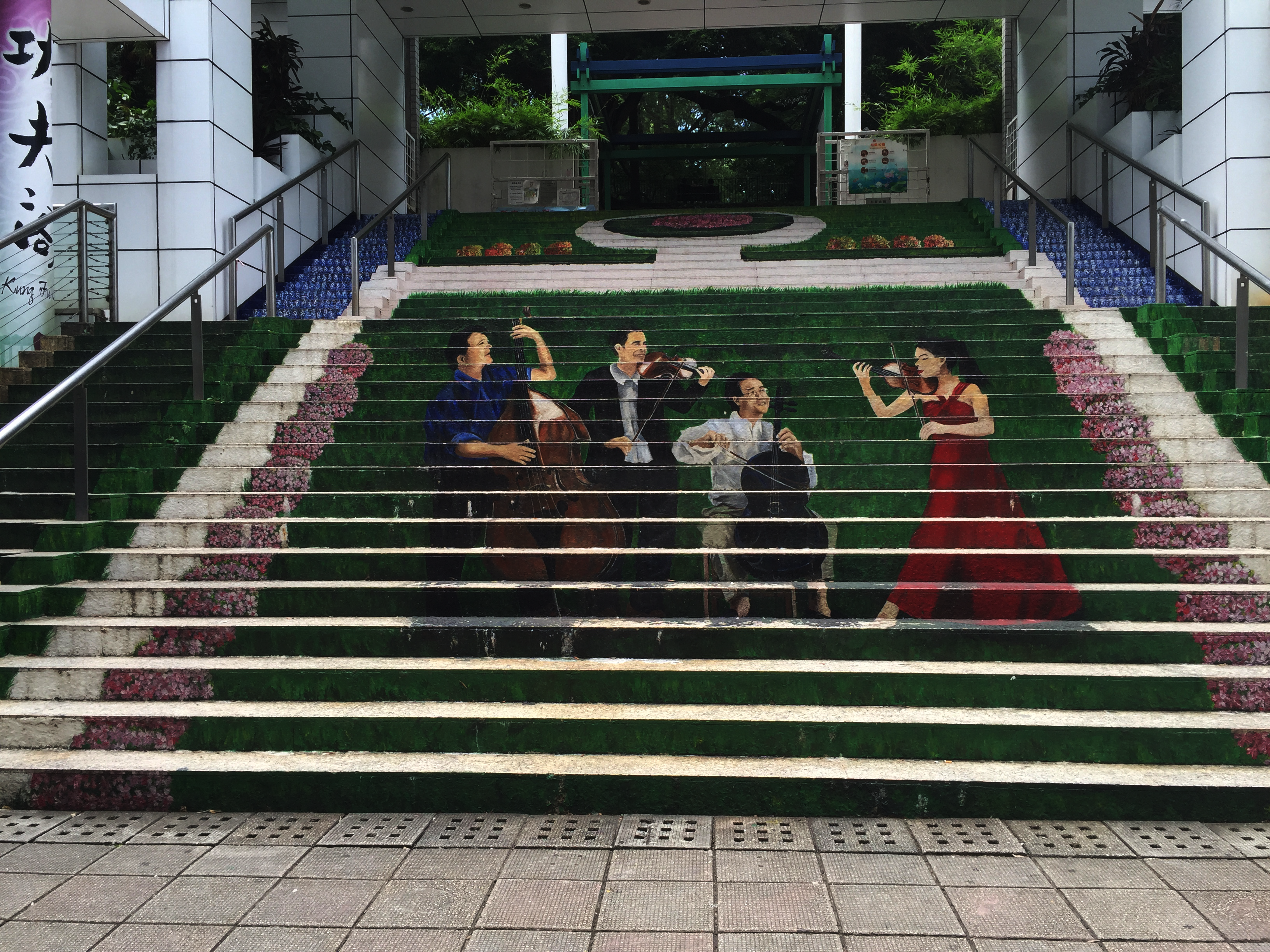 One of the many illustrated steps of Kowloon Park, Nathan Road… Photographer @KevinJamesNg -2016

Exploring adventurously bit by bitty, there’s the park around the corner, its call Kowloon Park, it sits alongside within Tsim Sha Tsui, Kowloon also it mostly my morning walking haunts as I explore around already tomorrow in Hong Kong… also it’s a good sneak towards the China Ferry Terminal. Kowloon Park formerly the British Army’s Whitfield Barracks sits on top on a major Subway network substation system in which of Tsim Sha Tsui, The Tsim Sha Tsui station can be found on lower Nathan Road, on the corner of Haiphong Road.. In which was forms the Tsuen Wan to Hong Kong line…   But the most obvious place of how to find it into the park is finding the Kowloon Sports Center from Austin Road…  or various decorative steps that leading into the park that illustrates the different artistic culture of Hong Kong…

Among the park, lies a long row of two levels shopping complexes- Park Lane Shoppers Boulevard that lies below the park in which lies between the muralized steps of Nathan road with different bronze structures among the footpath widen pavement walking down wards is the Kowloon Mosque and Islamic Center in which has unique colonial post-modern architecture ….. Among within the park itself lies with an interesting concept a small miniature Mac Donald store that does drinks, of cold and warm, also a selection of smoothies, ice creams..  but within has a collection small aviaries, in which has in its collection of  Flamingos, also other various type of birds that used to be part of the former British colonial Governor General bird collection.

Also among the park that’s among Canton Road side is the Hong Kong Heritage Discovery Center, it’s worth checking out for in rediscovering of what was the park was like in its  former Army Barracks  days, now it’s full of Galleries, lecture Halls, with an libraries  with an ongoing with Hong Kong architectural history in explaining its heritages……

Alongside the park is where the confines of the Kowloon Park Swimming pool is the Hong Kong Avenue Comic Stars in where there’s statues of various comics characters… from various Hong Kong television visual history….

Kowloon Park is always safe, in which is carefully heavily monitored by parks webcam for security during day and night, also around the Corner between Austin and Nathan Road, is the Yau Tsim District Police Headquarters, so there’s bound to be police officers on the beat, walking around the neighborhood on the streets. So when exploring round the park, noticing them every ten or fifteen minutes walking the beat in which is ensuring comforting to as it’s rare in Auckland, New Zealand that we get that neighborhood assurances….

I could spend ages walking around the park exploring every single pathway, in which some paths are intimate in nature as each part is thematic, as romantically, or for self-relaxing ….  As in the morning you’ll see the elderly exercise every, morning also as Sunday comes along you’ll see the Philippines workers, taking there restful days off, in also selling there produces  to make an extra little entrepreneurial income for themselves..